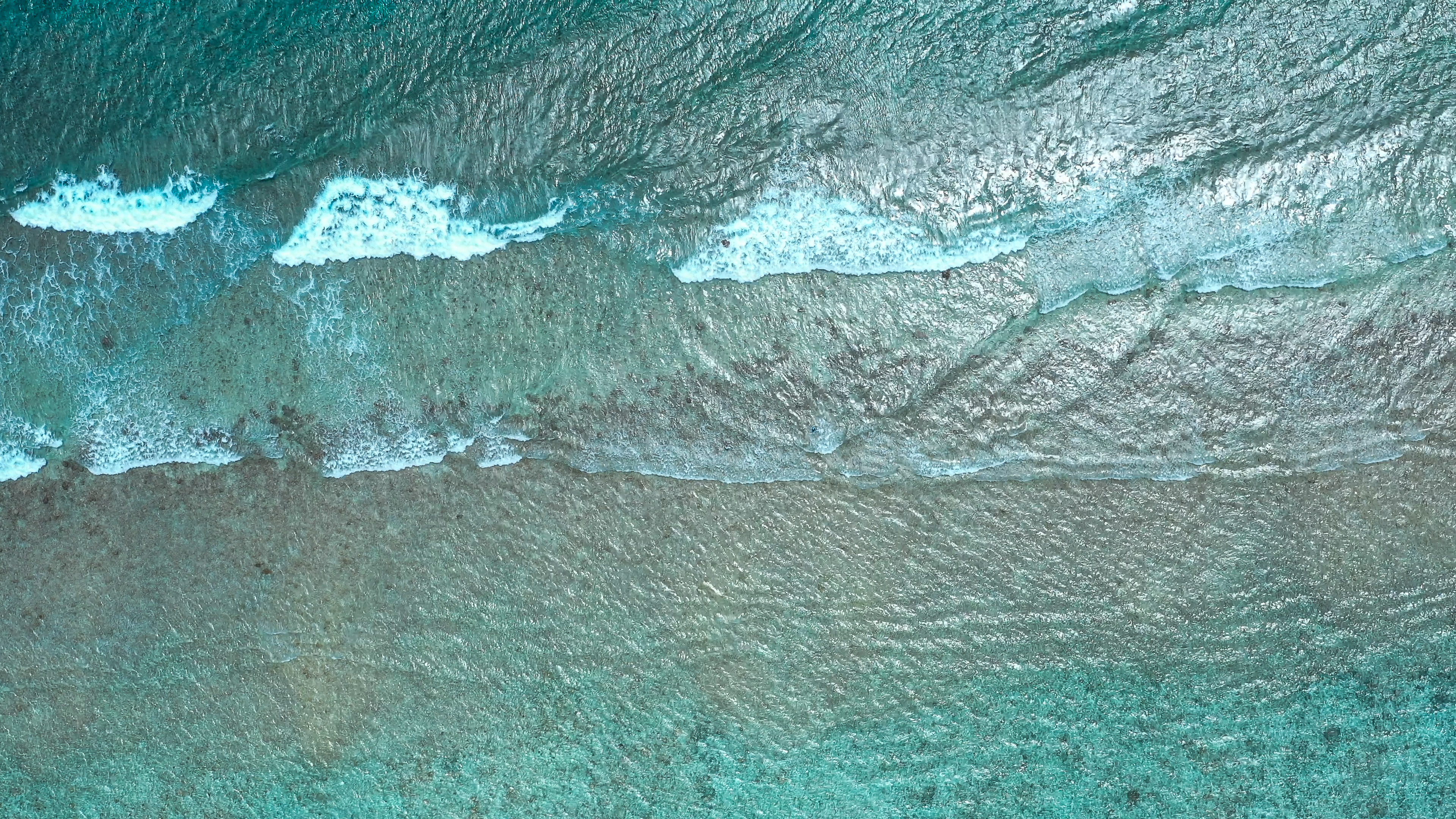 Flyfishing in the surf zone has become my obsession, and is without a doubt the only kind of fishing that can really get my heart going, pure adrenaline rush. Just to see the giant trivially come cruising down next to the reef in the surf zone literally make me shake in my pants. I’ve seen GTs that are literally bigger than myself. I was paralyzed, i did´nt know what to do, should i throw my line out, or run away? i was actually scared, i could feel my stomach turning, but i decided to cast out my line, but the GT could´t care less, it circled around me once, and was for sure just checking me out, it wash´t interested in the fly nore me. i felt it was to smart and old timer, i would imagine that was why it had grown to the size that is was.

There´s countless reasons for my obsession, with fishing in the surf zone.one is that you can experience gigantic fish swimming pass you in knee high water, and sometimes less, and it is not unusual at all, to see huge GT´s come swimming sideways, because the water is to shallow for them to swim upright, and the to see them, just explode in the same second they spot the fly, and half of their body is above water and they are almost climbing out of the water sideways on to the reef in an explosion, of bait fish flying in all directions as the GT tries to catch the fly. To be experience all this on a daily basis in the season, when we do our fly fishing tours, is like being in flyfishing heaven, if one can call that an obsession, the i am morbidly addicted.I remember the first time i stepped out of the boat and on to the reef in the surf zone, i didm´t have a clue of what was waiting, i was overwhelmed by the size of the waves that was constantly pounding over the reef, and on to my chest, i had to struggle to stay in balance.

There was this one time, when my line was just all over the place and i litter rely got my self entangled in my line, so i constantly had to unwrap my line out of dead corals,while trying to cast my line out to shoals of bluefin trivially or giant trevallys cruising around.It was a crazy time with may frustrations and defeats.But one thing that really got to my nerves was that my fly was constantly rejected in the first eight day of fishing, and i couldn’t figure out why the GT rejected my flies, i have tried every possible option in my flybox with absolutely no result. So on day nine, i went on the reef in to the surf zone as i have done the past eight days looking for GT´s, when i spotter a small shoal go bluefin trivially´s. i layed out my line to them and started stripping in my line, they instantly started to attack the fly, and while the bluefin trevally is heading for the fly, i could see from the corner of my eye a dark shadow approaching my fly,and with unbelievable speed it took my fly, and the water was whipped white, at that moment i knew the fish was on, my heart started pounding almost beating to fast i knew at that moment i had my first GT on Finally.

Eventhogh it was a utter and pure luck, it didn´t made it less fun, but in fact i wash´t a Giant Trevally,  a beautiful silver colored GT on about 15 pounds. I was so delighted but yet surprised by how exhausting and difficult fly fishing in the surf zone really is. Back then i wasn´t using line basket or a flex stripper, but now i know, never to go back in the surf zone without.I noticed when the GT came from the side, it was quite far away from the fly when i spotter it, at least 20 meters away, i was slowly starting to see all the things that i`ve done wrong the previous days. the Giant Travelly has very large eyes and can probably see movements and silhouettes from a very long distance, but how far can they really see? After spending countless hours in the surf zone, i have gained quite som knowledge go the various reefs i fish on, i have with blood sweat and tears experienced, that the Giant Trevally  uses a mix of different instruments in it`s search for prey, such as sounds (splashes), and movements ( silhouettes ), but it also uses its sense of smell, they are well adjusted opportunists, that throws themselves over everything they can swallow. After i got the first one and experienced from how far away they can see my fly, i knew that my mistake was to throw my fly to close to them,The GT is used to see baitfish trying to escape in the opposite direction, away from itself, so by throwing my fly too close to the GT i probably made it suspect that something was wrong, and therefore ignored my fly. 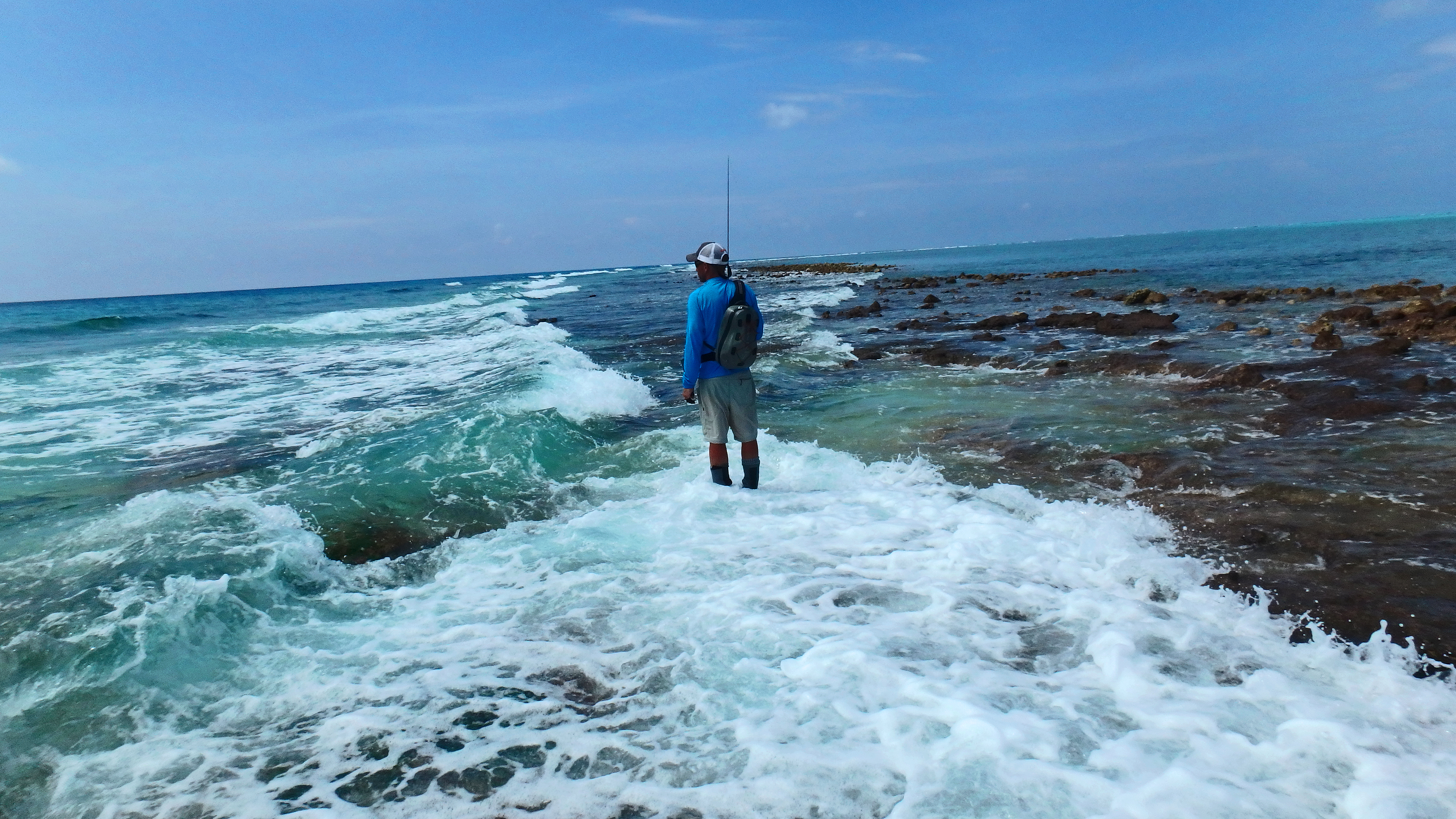 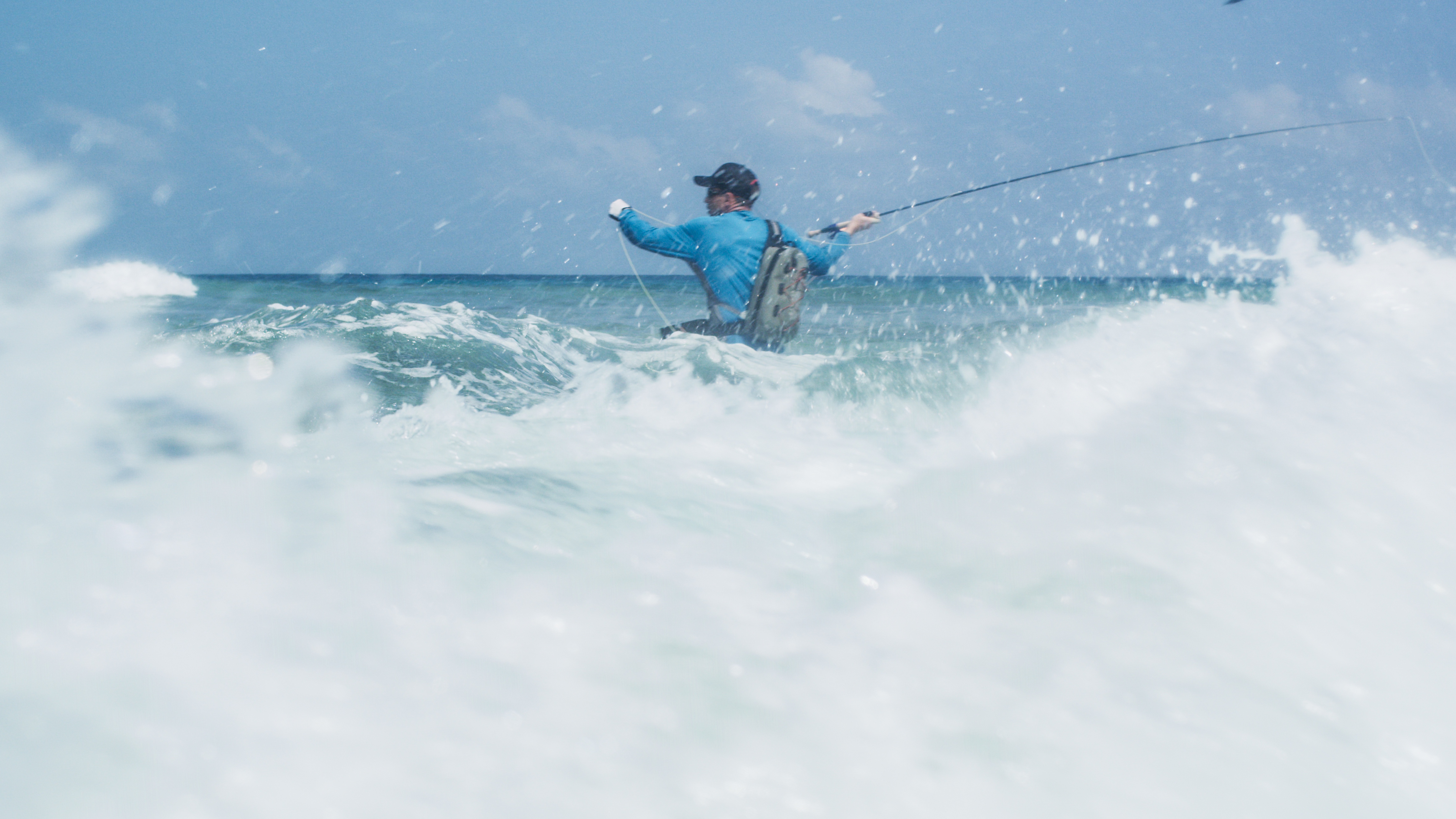 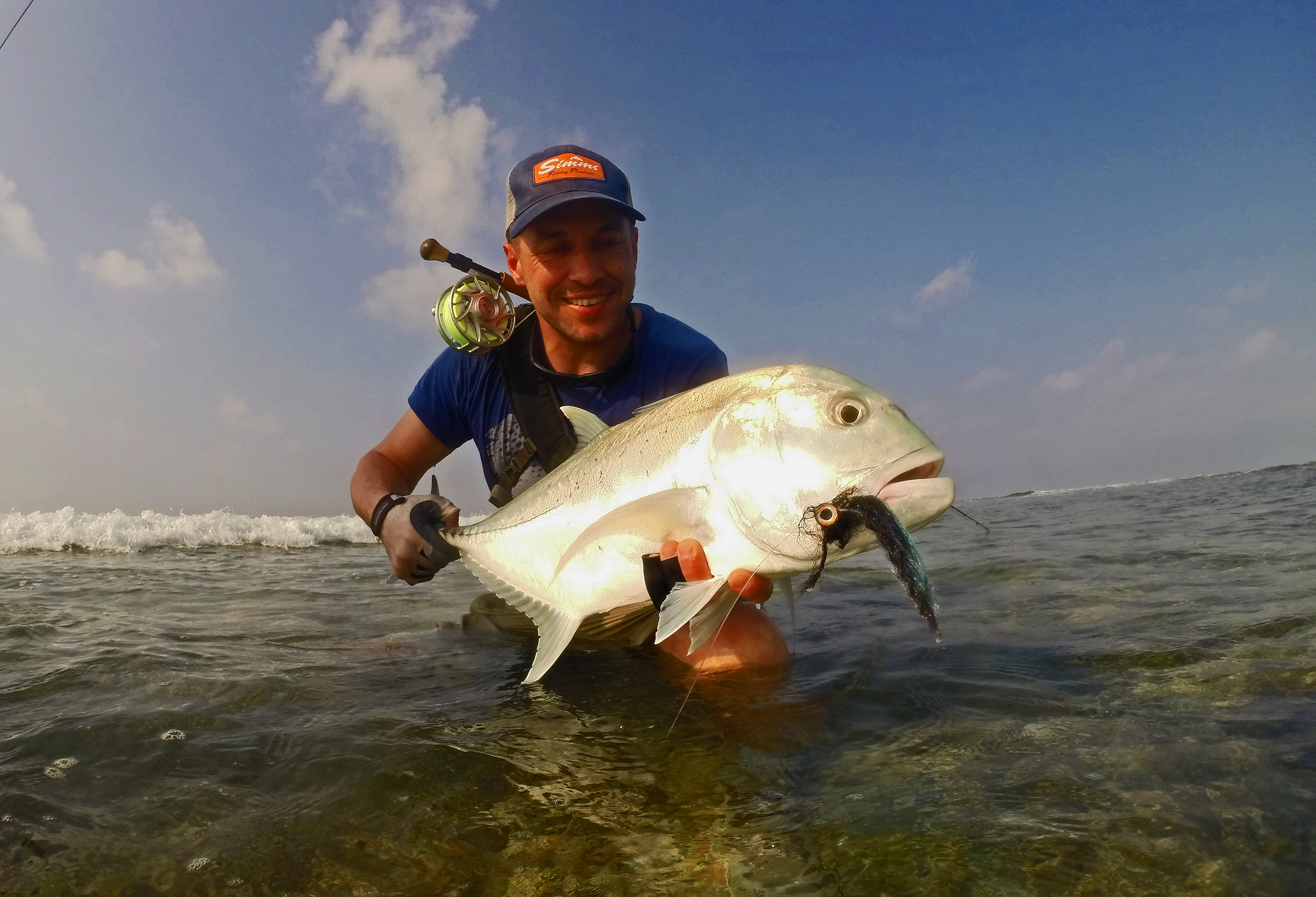 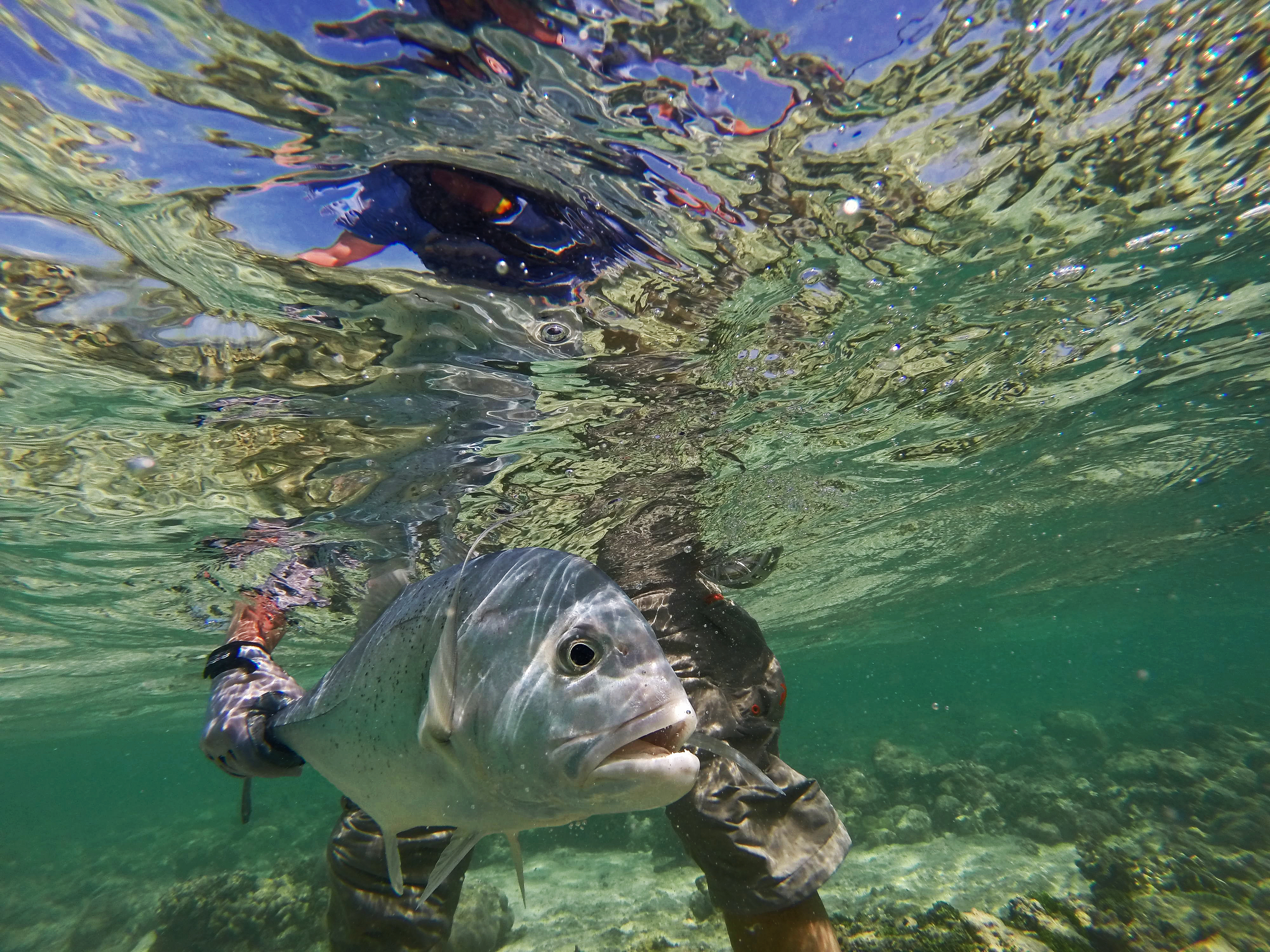 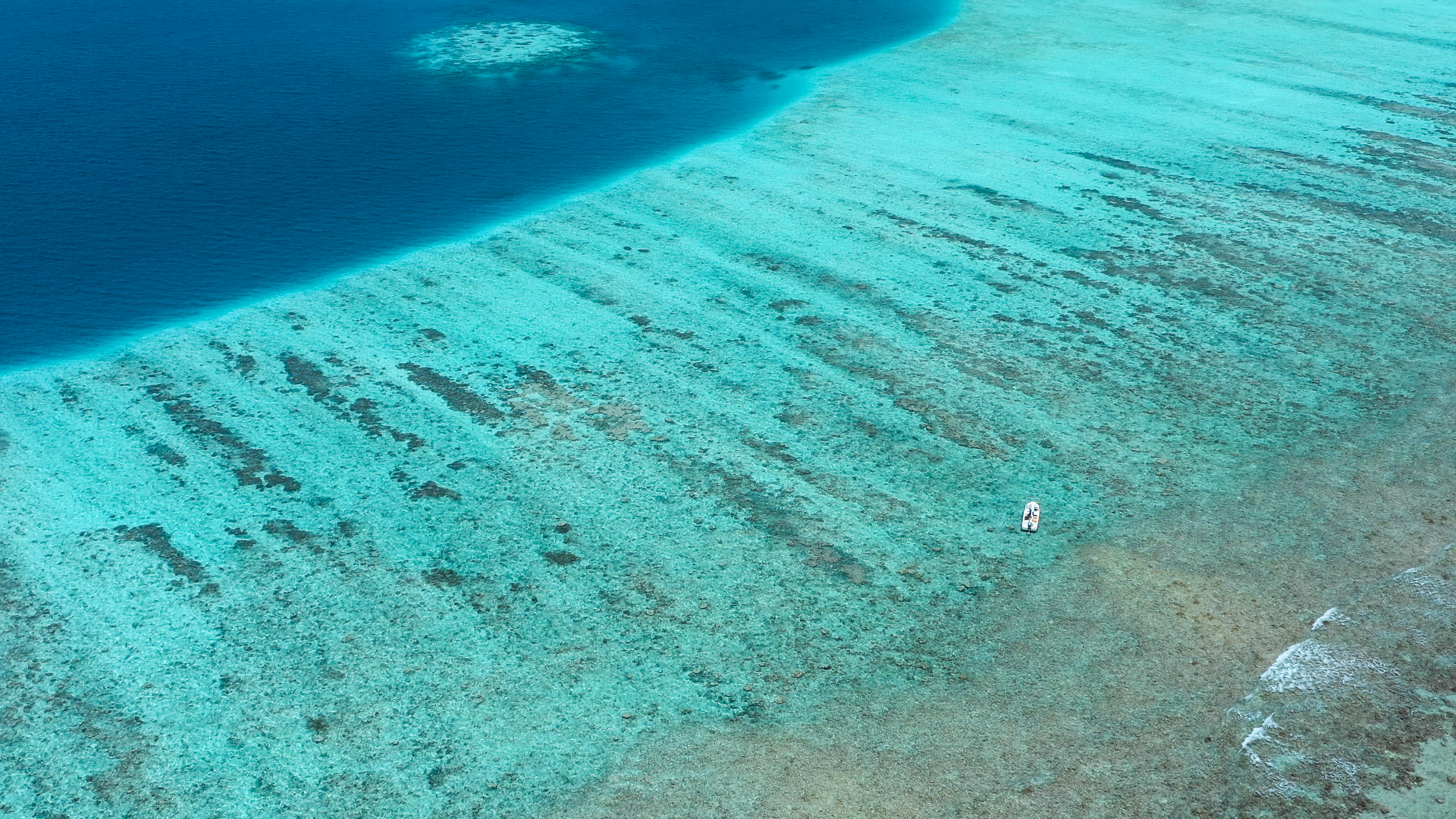 When hunting the Giant Trevally in the surf zone and on coral flats ind the Indian Ocean it is extremely important to know something about the tide on the locality you are fishing on, that can really save the day or your whole trip. Some reefs in the Indian Ocean extends as far as the eye can see. The the surf zone and reefs can look similar as far as you can see but can vary in many ways everything from oversized pieces of dead coral hidden just below the surface, or living coral everywhere and all are like razor blades, with swells that beat one constantly, the surf zone can be a tough ride to wade in, but are also some of the most productive places to spot the Giant Trevally. 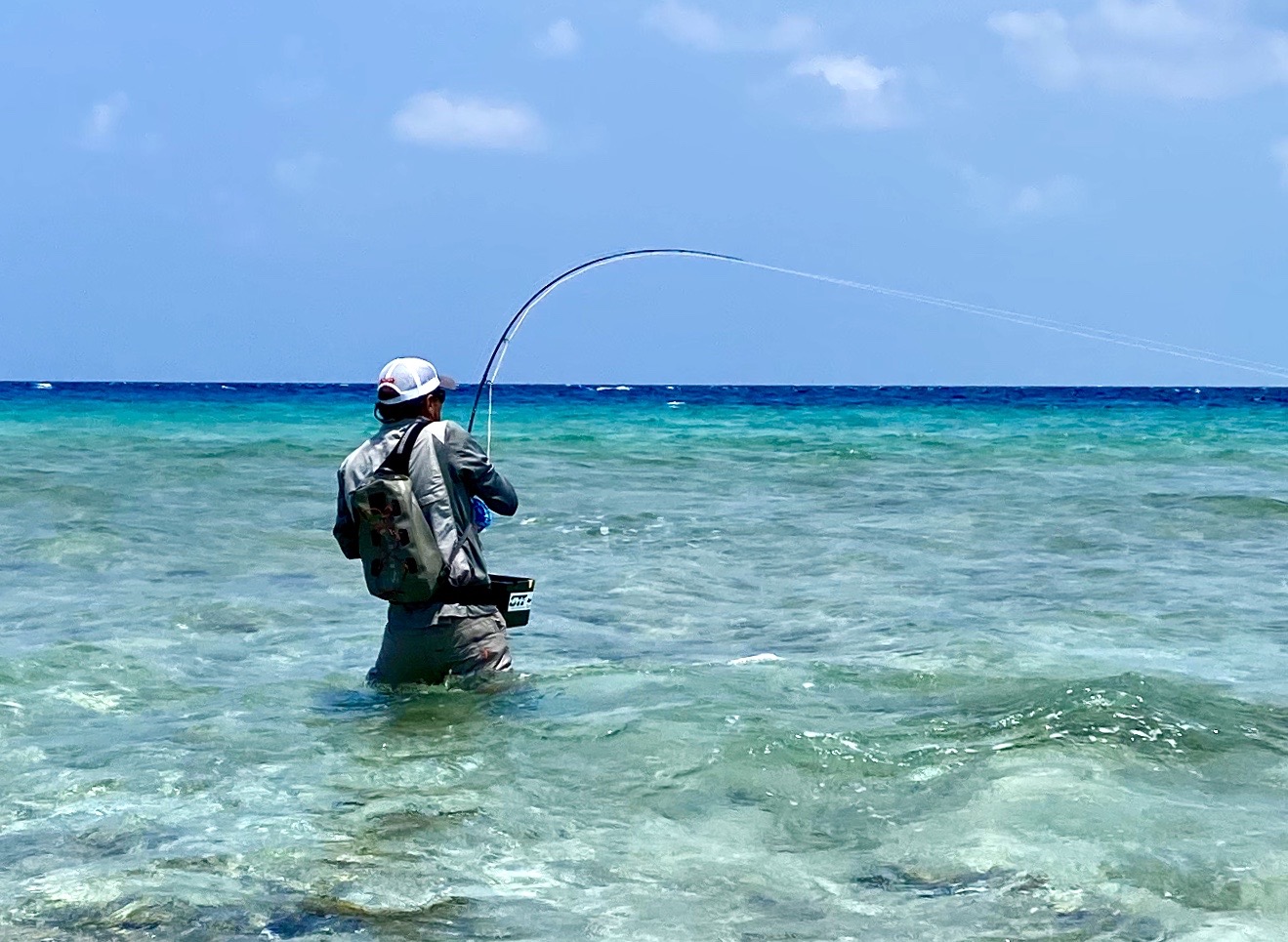 In the Maldives where we operate, there are many different options when it comes to fly fishing for Giant Trevally. Common to all of the locations we fish on, is they are all depending on the tide in one way or another. We have seen very productive places that fish well in falling tides and in low tide, but keeps no Giant Trevally in the rising tides or at high tide, despite that the location holds many baitfish in the shallow water of the reef. But on the same reef there may be places who only fish well in rising tides and high tide, so you can actually stand on a reef, that is as far as the eye can see, which fishes just as well at rising tides and high tides as it does at falling tides and low tide. One can say, that the saying to be in the right place at the right time makes good sense when fly fishing Giant Trevally in the surf zone. 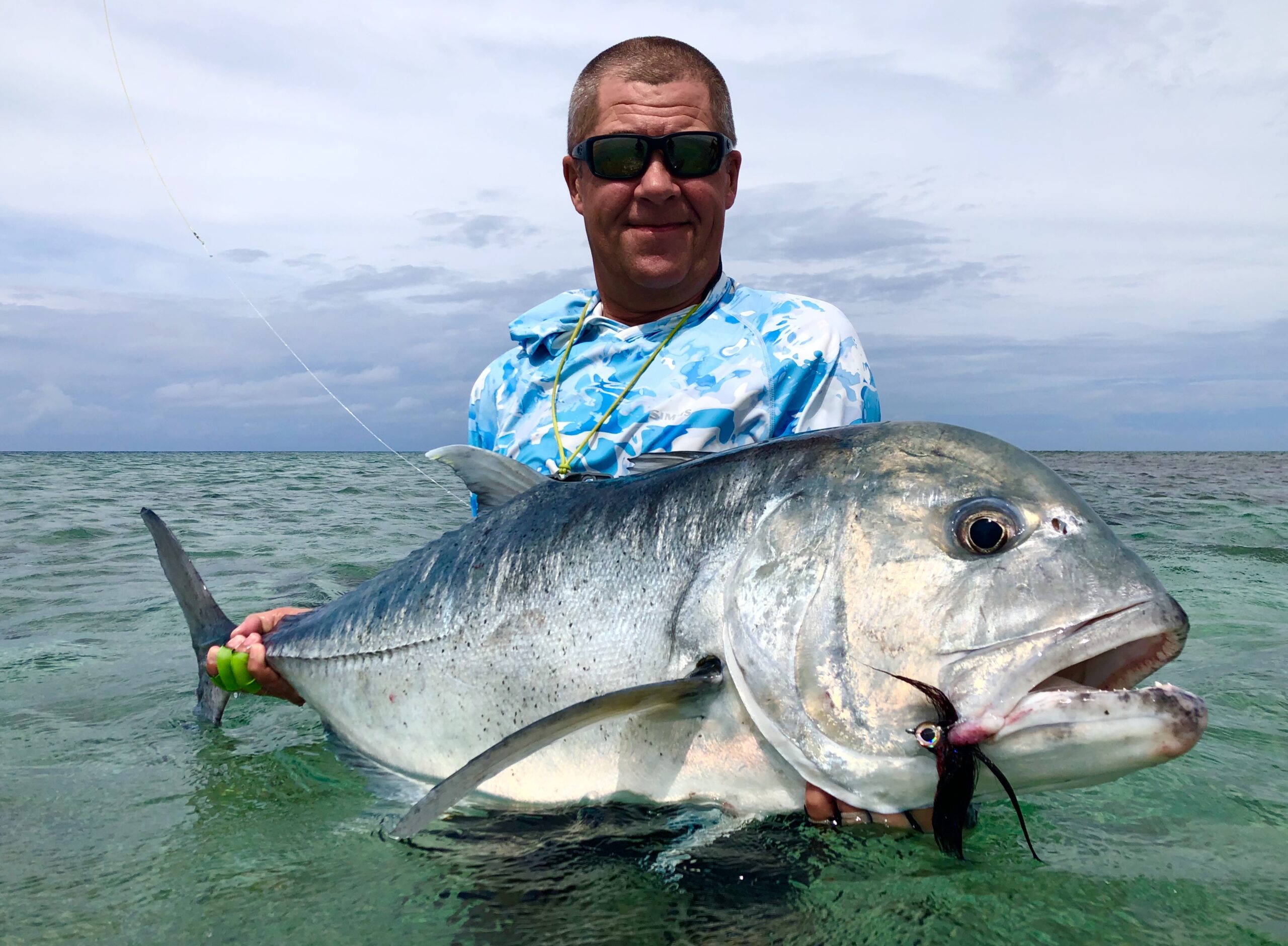 So by getting acquainted with the tide and lunar cycle and obtaining knowledge of the geographical environment on the locations where we are fishing we will improve our chances of success. This however will never be a guarantee, that will insure you to land the King of the reef, but a helping hand to guide you in the surf zone, on coral flats, sand flats and sandstone plateau. 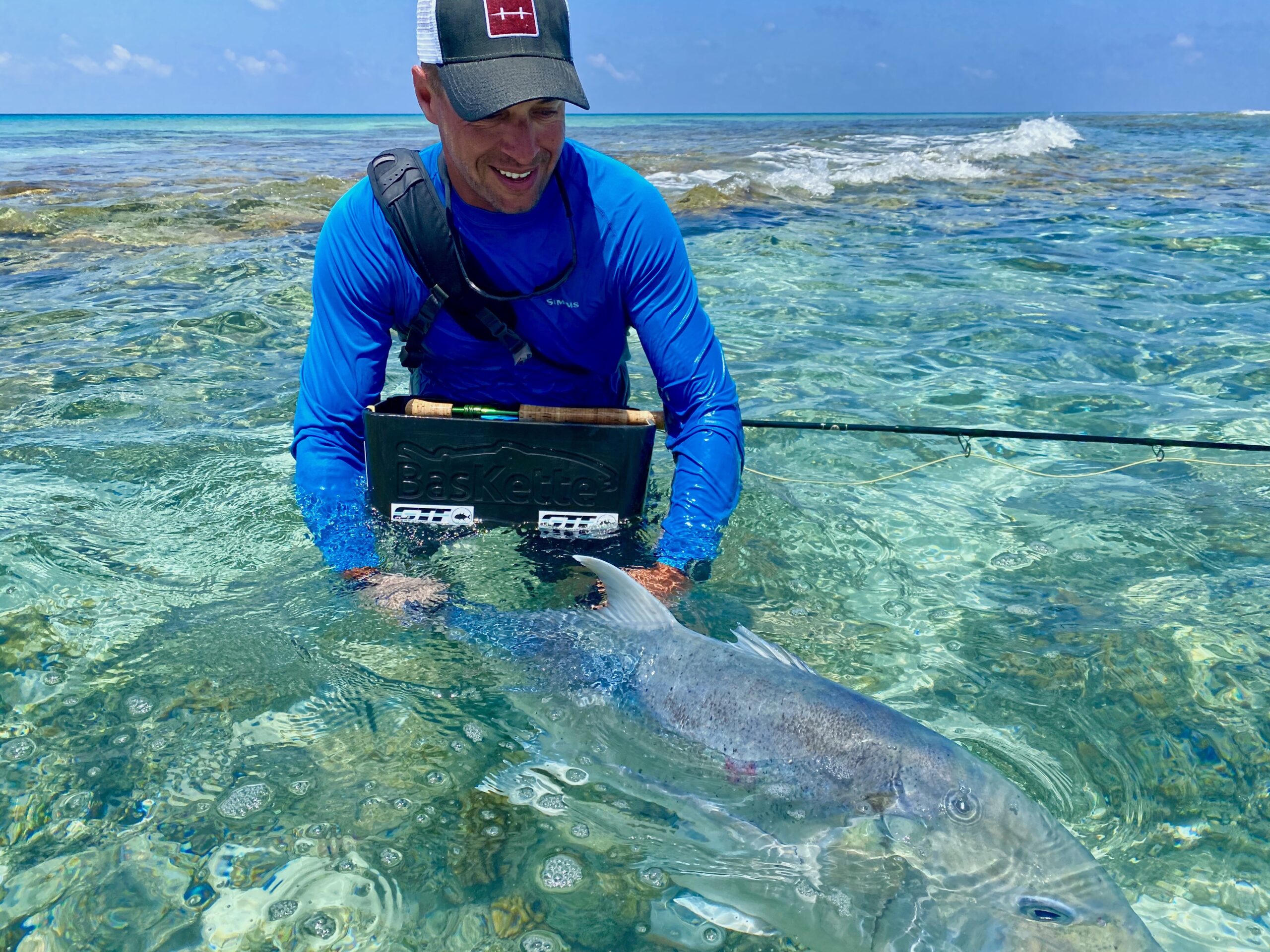 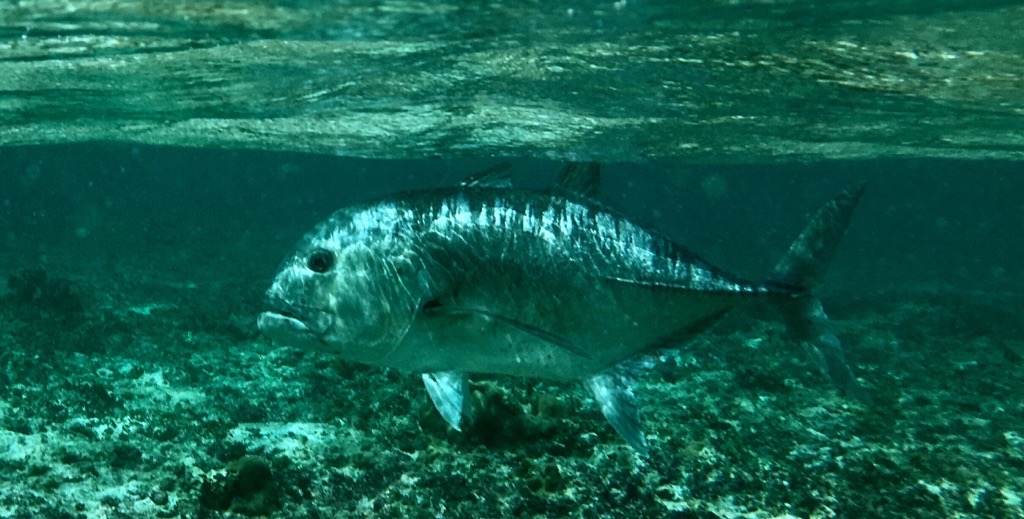